Thanks again to HISA for inviting us, and for the excellent Q & A / meet and greet after the talks. In particular thanks to Chris Radbone for organising the event.

We got a tour of SAHMRI before we started, and I can say that the building was as impressive from the inside as is from outside. 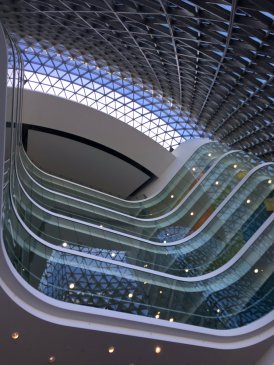 The spaceship vibe of the outside continues on the inside.

A very interesting layout too – very open plan throughout (some researchers love this, some hate it), but I really liked the idea of having the wet-labs right next to the office space. Do some experiments, walk ten metres, and analyse the data! It also made everything feel much more “science-y” to have the labs on display (with glass walls to maintain a controlled environment). One should never discount the benefits of a research workplace putting the Science! front and centre.

The mad scientist vibe is strong at SAHMRI, and it is awesome

With SAHMRI, the new Royal Adelaide Hospital and the new Med School and School of Nursing all together at the North-West end of Adelaide, I honestly think South Australia is going to have one of the most exciting medical precincts anywhere in the world. A great time to do research in SA.

The event opened with a welcome from Louise Schaper, the CEO of HISA, who spoke about the organisation.

Are CEOs allowed to be this fun?

Louise is a great speaker, and gave an exciting overview of the role of HISA in Australia and worldwide. Since most people don’t really grok what health informatics is, I thought I would put a little explanation up for people to stumble across. Louise explained that she stumbled across health informatics on the web herself after she struggled to identify what to call her own interest – “people who make computer systems for healthcare”.

That isn’t really a complete description though, because undergrad IT and CS students can make “healthcare” apps and many doctors work with data in excel or access. Health informaticists are people who straddle healthcare and information technology, and have at least a working knowledge in both fields. Healthcare is so complicated that technologists cannot have much of an impact without health knowledge, and most doctors barely know one end of a keyboard from the other. Health informaticists come from both sides of the health/tech divide. They can be medical professionals like doctors, nurses, physios, pharmacists and OTs who have learned coding, infrastructure and data. They can also be computer scientists, database experts, and data scientists who have trained to learn about health systems, healthcare funding, research, and disease.

So if you too have been looking for the right terminology to use for someone who builds health IT systems but also understands the problems we face in healthcare, look no further. You want Health Informaticists.

Beyond that, the talks we well. Prof Lyle Palmer (my PhD supervisor) spoke about big data infrastructure and epidemiology. It was a great (and fun) talk. 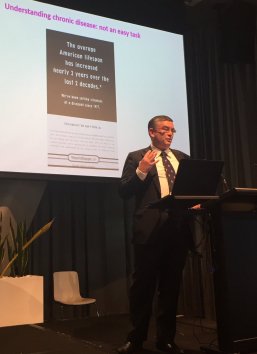 Check out the picture on screen. Health misinformation is a challenge.

I spoke too, a nice length talk about deep learning and precision radiology (about 30 minutes this time) so I got to cover a lot more ground. I “borrowed” Blaise Agüera y Arcas’ mathematically intuitive explanation of deep learning, which I think is one of the best I have seen for a tech-savvy audience. Not too heavy on the formulas, but not too light and hand-wavy.

The crowd-pleasing moment was when I suggested that computer gamers were directly responsible for deep learning working. Without gamers buying graphics cards for the last 20 years, we would be decades away from being capable of deep learning. The ability to do deep learning actually came quite late in the GPU development cycle – we had Crysis for 5 years before AlexNet was a thing. Imagine the state of AI research if we never went further than Wolfenstein3d or Doom.

So next time someone complains you are spending too much time playing games, or you are telling your children to get out more, remember that gamers have changed the world and will be responsible for trillions of dollars of economic benefits in the coming decades 🙂

I also sneakily showed some new (and very exciting) unpublished results from our research group, but those will have to publicly stay under wraps until we have finished our experiments!