And I love dropping out of them.

This picture turned up in my Twitter feed recently, from Class Central by way of the Economist and tweeted by @EricTopol (well worth following).

It’s references all the way down

We can also see (from Class Central again) the number of classes is following the same trend. 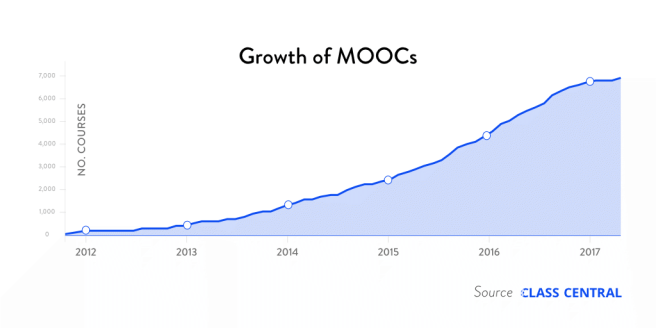 This is exactly what I would hope happens with MOOCs. Khan’s law, or something. A roughly 1.2 year doubling time, and a massive expansion of low cost education opportunities worldwide.

On a side note, I’m not sure why the 2017 extrapolation is for levelling off. The trend looks pretty solid up through 2016. But even if we have reached saturation, the stats are pretty amazing.

Despite this growth, there are critics. They say MOOCs are hype that don’t deliver on education promises. And they think they know why.

DON’T TELL ME HOW TO DO MY LEARNING

“There is only a 7% completion rate,” they say. “The majority drop out and don’t get an education.”

This is both true and misleading. Drop out is not the same as a lack of engagement.

MOOCs have no barrier to entry. Most of these courses can be tried for free, at no risk. There are tons of real-world courses I have taken that I would have abandoned if I had the choice, if not for the sunk costs and the risk of tanking my GPA, or the requirements of my degree. They didn’t interest me, and they didn’t seem relevant. Maybe being forced to sit through them was a good thing, because in my teens and twenties I wouldn’t have made good choices.

But MOOC students are not teens. They are adult learners*. Over 75% of MOOC participants have a bachelor’s degree or higher.

The key feature of adult learners is that they are self-directed. This is usually loosely defined as “being able to learn a syllabus reasonably autonomously, with some direction in the form of book lists and in-person teaching.” Really, this sentence encapsulates the ethos of higher education.

But being an adult learner means so much more than this.

It also means knowing what parts of the syllabus are important to you, what parts are not relevant, what parts can be skipped, and what you want to achieve. This is not how traditional education works, where we set goalposts for learners and define the scope of their learning.

An adult learner without barriers to access can engage with education in a whole range of ways that brick-and-mortar students cannot.

These aren’t fixed groups. I engage in all of these ways, depending on the course and my needs.

As an adult learner, the ability to try out a course and see if any part of it matches my needs is fantastic.

I’ve signed up to courses I have never started, because they seemed interesting but I didn’t have the time. They sit in my Coursera and EdX profiles like Steam games after the summer sale. For both the MOOCs and the games I will probably never get around to them, but ancient Chinese history and Arx Fatalis both seemed worth trying when it cost me next to nothing.

I’ve dropped courses at the start because they didn’t cover the material in a way I enjoyed, and I had alternatives. I could choose between several instructors and formats, and so I tried all of them before I focused on one. As an example, there must be over a dozen world-class introductory computer science courses available. CS50 is super popular, but I really don’t like the big lecture style**.

I’ve dropped courses in the middle because I was interested in a particular subtopic in the syllabus. I know a little about a lot, and so big chunks of many courses are redundant. But there are gems of knowledge I can mine from beyond the well-trodden paths of the introductory lectures.

I’ve dropped courses at the end because the whole course was interesting and worthwhile, but the projects and quizzes I needed to pass it were useless.

I’ve completed courses because it was all worth it.

I’ve augmented courses with books and blogs and Khan academy and other online lectures.

I must have dropped out of between fifty and one hundred MOOCs, and in almost all of those I at least watched the introduction. In many of them I put in between ten and fifty hours studying the material. And that is not the same as “dropping out”. Not as people seem to use the term when criticising MOOCs. I learnt in the way I wanted, when I wanted, how I wanted. 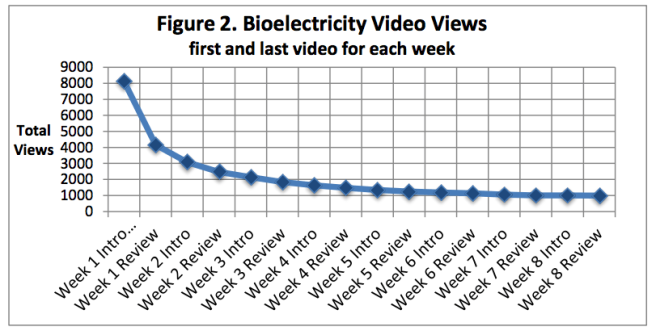 A case study: Twelve thousand people started the first session of a Bioelectricity MOOC on Coursera. Eight thousand opened at least one video. A thousand watched all the videos.

Only three hundred and fifty completed the course.

So we could call this a 97% drop out rate, and wail and gnash our teeth.

Or we could say that a thousand people watched an entire course on bioelectricity. Three times as many as “completed” the course. They learnt it all (to some degree), but didn’t do all the assignments. I wonder how many years they would have to run the course at Duke to teach that many students?

Or we could say that, roughly eyeballing that chart above, thirty two thousand people watched sixteen videos. That means two thousand person-equivalents watched whole-course-equivalents. They just chose which part to watch, and left when they had their fill.

Or, we could just say that twelve thousand people engaged with learning in a self-directed manner.

I kind of see drop out rates as completely missing the point of MOOCs. They don’t measure anything we should care about. I would love to see more detailed data on how people engage, what they actually do, how long they spend on the material (both on site and off-site). I’m sure that if the staggering growth in MOOCs continues, there will be a whole field of academics who make their careers out of studying this data.

But they won’t care about drop out rates.

Because dropping out is awesome.

* One of the areas I do research in is the application of artificial intelligence in education, but specifically for teaching experts. I think I am at least partially justified in claiming some knowledge here. Forcing adults to do a specific sort of learning is like herding cats, if the cats could just spit in your face and walk away with no repercussions.

** I actually still watched at least half of CS50, because it offered some things the other courses didn’t. Picking and choosing is what adult learners do.

4 thoughts on “Why I just love dropping out of MOOCs”