So, the big news in medical AI research is that the Stanford ML group under Andrew Ng has released a paper on chest x-ray interpretation that claims human performance at identifying pneumonia.

Second up, I have concerns. Vague and not so vague discomforts.

So, after having a few days to wrap my head around the paper, here is some of my reactions. Note that I will review this paper more thoroughly at a later date as part of my “end of human doctors” series, but for now I wanted to dive in a little bit. This will be a mostly medical discussion, but I promise it will be an important one for anyone who works with medical data. I should also point out that the majority of this discussion isn’t about the Stanford work, but instead is about the publically available dataset from the NIH team of Wang et al.

Full disclosure, cards on the table and all of that: my team has a paper where we claim radiologist level performance at a clinical task dropping on arXiv next week. I hope that nothing I say that follows is seen as trying to diminish the work of Rajpurkar et al. or Wong et al. If either team wants to get in touch, I am happy to make updates to this post with new information and correct any errors 🙂

How to beat a doctor

One of my most popular blog posts has been “Do machines actually beat doctors?” In it I explain the difference between a clinical task and a non-clinical task, why that matters, and give a guide to identify when news articles are making fair comparisons with human experts.

It boiled down to these questions:

So very briefly, in reverse order:

3. I am looking at the primary research, so this isn’t relevant.

2. Yes! It is deep learning, and the dataset is ~109,000 cases. I’ve previously mentioned a rule of thumb (that is adapted from Andrew Ng in the first place) that you need around 1000 training examples of what you want to learn before you will get near human performance. This is a very loose rule, but it is a good ballpark. The ChestXray14 dataset has over 2000 cases of “pneumonia”, and in fact apart from their “hernia” class (n = 284), every label has over 2000 examples. The largest class, “infiltration”, has 25,000.

So far so good.

1. Here is the issue. Is detecting pneumonia on chest x-ray a clinical task?

Simple answer: no, it is not. Pneumonia is a mostly clinical diagnosis, and there are very few specific signs that an abnormality on chest x-ray is pneumonia as opposed to other common pathologies. Let me explain.

Pneumonia is an infection in the lungs. This means a pathogen, like bacteria or a virus, has set up shop and is causing trouble. In most cases, trouble means swelling and pus. On a chest xray, this usually means you get fluid in the airspace (ignoring interstitial change for the moment). When the air (low density) is replaced by fluid (higher density), you get white clouds on the x-ray, otherwise known as consolidation. 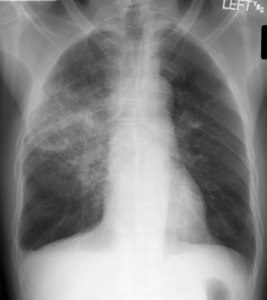 A cloudy opacity in the right upper lobe (x-rays are always viewed with the patient looking towards you, so the left side of the image is the right side of the person)

So, let’s look at things that can make clouds in the lungs. From Radiopaedia (the best resource about radiology around, it is free and better than most textbooks):

The exhaustive list of all possible causes would be huge, but a useful framework includes:

So here is my first concern. It isn’t about the paper by Rajpurkar et al., it is about the dataset. The NIH team of Wang et al. distinguish between pneumonia and consolidation. Radiologically, this is almost always impossible. Pneumonia is a type of consolidation, the type where the airspace is filled with pus. Pneumonia ⊂ consolidation.

I checked this in my local hospital data. There are about 30,000 occurrences of the word “pneumonia” in chest x-ray reports, in and about half of these (15,000) the word “consolidation” is also used.

But in ChestXray14 they don’t co-occur! With over 2000 cases of pneumonia, there are only 114 co-occurances with consolidation (data here). 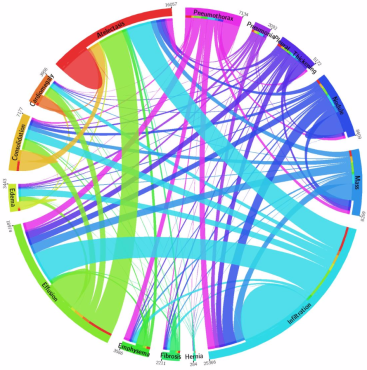 The co-occurrences in the ChestXray14 dataset

But unfortunately they co-occur, and the lung shrinking can be very subtle. In most circumstances, they are indistinguishable. One of the most common phrases used in chest x-ray reporting is “collapse or consolidation”. In fact, in my dataset over half of reports that contain the word consolidation also contain the word collapse (90,000 out of 140,000). Now, this matters, because there is another phrase in this dataset – atelectasis. This is just a fancy word that means collapse. Usage of this term varies geographically, but I had a look through the first few hundred examples of “atelectasis” in the ChestXray14 dataset, and just under half of them are indistinguishable from consolidation (to me*). In their labels, there are 16,057 cases of atelectasis, but co-occurence with consolidation is only seen in 1222.

But there is more confusion in the labels, because there is another term in the data: infiltration. This is a pretty rare term where I work (and more widely if this Twitter comment from Dr Deng is anything to go by), but it generally means “airspace opacity”. Almost a quarter of the ChestXray14 cases have this label.

Since the usage is a bit strange, I dove back in to the images of the dataset, and in the first few hundred over half are visually indistinguishable from consolidation (to me*). But in the dataset, the co-occurrence is less than 25% for each of pneumonia, consolidation, and atelectasis.

What this boils down to is that atelectasis, consolidation, infiltration, and pneumonia all look like clouds. Despite this, the degree of label overlap is very low, and deep learning systems seem to have moderate success at distinguishing them. I remain confused.

The mess that is clinical data

Some of these issues are an artefact of radiological practice. The terms are roughly interchangeable, and radiologists are unlikely to be able to distinguish pneumonia from other opacities with any level of confidence, given only the x-ray. But since there is no underlying ground truth here, the label pneumonia probably doesn’t mean what it sounds like it means. This is the problem with a lot of clinical data: it is based on (flawed) human interpretation. I favour targets for machine learning which have a highly accurate ground truth for this reason – disentangling the sources of error in clinical datasets is a Herculean task, if it is possible at all.

There are some other minor issues with this dataset:

So what does this all mean for the paper by Rajpurkar et al. that claims human level performance in pneumonia detection?

Well, I don’t know. Reading the paper, it seems like the test they did against humans was in a different dataset:

“We collected a test set of 420 frontal chest X-rays. Annotations were obtained independently from four practicing radiologists at Stanford University, who were
asked to label all 14 pathologies in Wang et al. (2017).”

I still don’t understand how a radiologist can label atelectasis, consolidation, pneumonia, and infiltration as separate things, but I can believe that this dataset might be more consistent than the data in ChestXray14. The fact they have similar performance to humans is a worthwhile result, but I remain uncomfortable about any claims of clinical relevance.

I will dive into the paper more deeply another time, but I don’t want to do more in this post than raise some questions about the dataset. I want to be clear that I am not criticising the work of either team in this piece, both have contributed significantly with their research. I am suggesting that the dataset is not necessarily directly comparable to clinical practice (I am sure the authors of Wang et al. would agree with me), and that in particular the diagnosis of pneumonia using this data makes me uncomfortable.

* I am a fully trained consultant radiologist, a medical specialist who looks at these images every day.